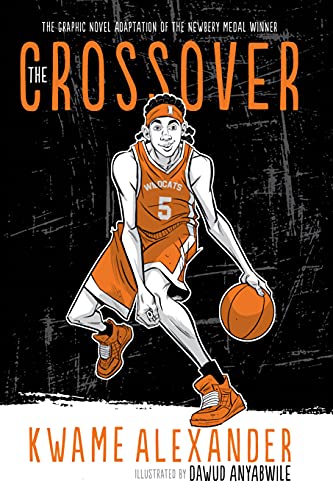 “The Crossover” by Kwame Alexander: A book review

“The Crossover” by Kwame Alexander is a coming-of-age story written in verse. The Crossover follows a twelve-year-old boy named Josh Bell navigating his changing relationship with his twin brother, JB, and their father’s health issues. The fast-paced and page-turning book details the challenges of growing up but ultimately resolves bittersweetly, showing strong character development at the cost of heartache.

Written in first-person narrative from the perspective of Josh, The Crossover’s slice-of-life chapters thoughtfully build Josh’s world for the readers. Josh’s family is obsessed with basketball, of which Josh and JB are very skilled. Kwame Alexander uses syntax and strong action words to communicate the emotion and passion of the game: “Spins, and S I N K S a sick SLICK SLIDING SWEEEEEEEEEET SEVEN-foot shot” (Alexander 73). The distinctly different writing style during basketball scenes communicates their importance to the Bells.

Alexander created multi-dimensional characters in his book by giving them a strong love for basketball. Additionally, Alexander displayed Josh’s complex emotions towards his brother. Although he loves JB, as their relationship transitions throughout the story, Josh struggles with the idea that he is losing his brother. The emotional turmoil inside Josh throughout the book feeds into what makes him so compelling and realistic.

While Alexander created round characters, he did not spend any time on the novel’s setting. Although a setting is usually crucial to storytelling, not explicitly stating where or when the story takes place aided the book’s spotlight on Josh’s struggles instead of being distracted by his surroundings.

Throughout the novel, Josh faces internal and external conflicts. He has to grapple with the emotions of his brother slipping away and the lack of concern his father seems to have over his own health. These frictions are so captivating because they can happen to anyone.

Ultimately, I enjoyed “The Crossover.” It was a quick read, fueled by an easy-to-read writing style, an engaging plot, and lovely commentary on the theme of growing up. As Josh grows throughout the story, he is both released from the weight of more minor issues as well as bogged down by a worry for his father. “Dad asks if we should stop at Pollard’s. I tell him I’m not hungry, plus I have a lot of homework, even though I skipped lunch today and finished my homework during halftime” (Alexander 77). This moment shows Josh’s worry for his father’s health and emphasizes how growing up and being aware of these issues affects him.

If you enjoyed “The House on Mango Street” by Sandra Cisneros, you will enjoy “The Crossover” as well. Similarly to Cisneros’s use of vignettes, Alexander’s verse writing style offers small glimpses into Josh’s life. Finally, both books delve into the theme of coming of age. By creating relatable characters and conflicts, Alexander wrote a book that younger generations will connect to for ages.