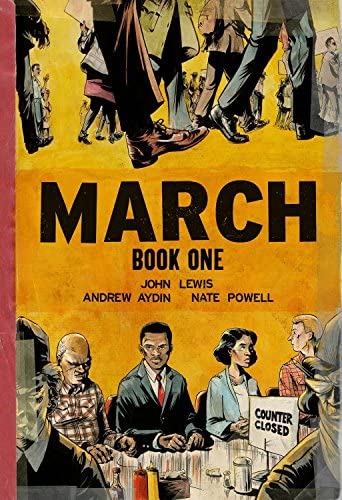 Review of “March: Book One”

Some people might perceive a graphic novel as not being that deep, but they would be wrong. “March: Book One,” the first of three written by John Lewis, Andrew Aydin, and Nate Powell, is a powerful story about Congressman John Lewis’ rise to activism.

From his youth in rural Alabama, to meeting Martin Luther King Jr. and going to City Hall, the reader is taken on an inspiring journey to fight segregation.

The march in the title comes from the March on Washington that happened in 1963. This movement was revolutionary in the never-ending struggle of injustice. Lewis worked with illustrators Andrew Aydin and Nate Powell to bring his story to life.

The stigma around graphic novels is that they are only suitable for a younger audience but “March” gives new meaning to this style of literature. Not only does this memoir provide innate illustrations that help bring the words to life, but it also discusses important issues like racism and the effects it had on everyday life at the time. Blacks were not allowed to even sit at the same table as whites in an establishment as simple as a local diner. On page 92, there is an illustration of four Black men quietly minding their own business at the diner counter, as a white waitress walks over with a “Counter Closed” sign. In this picture, I feel the juxtaposition between the seemingly peaceful men and the irate woman illustrates the impact of a simple sitting.

The authors introduce John Lewis in a personal and lighthearted way while still revealing details about him from the beginning. From a young age, he always wanted to save the chickens that he grew up with, and had a deep desire to pursue his education despite his parents’ wishes. John goes from an aspiring, small-town-Alabama boy to an important Congressmen who helped stop racial profiling and segregation. This style of storytelling is important because it demonstrates Lewis’ growth as a person. Furthermore, his fascination with chickens, a seemingly small detail, is the authors’ way of showing the reader that even from a young age Lewis cared for all living creatures.

Despite the fact that “March” can be suitable for all ages, Lewis’ primary purpose was to get his story to the younger generation in order to inspire them to protest against such injustices. He elucidates said injustices in a real and raw way, instead of watering down the truth. The authors get this message across beautifully especially when a citizen says, “These young people were not disturbing the peace–far from it. They were peaceful customers, fully compliant with the law, who were harassed and beaten” (Lewis et al. 1-7). This line helps young readers understand the severity of the blatant racism that took place and hopefully motivates them to take action like the characters in the book.

John Lewis, along with Andrew Aydin and Nate Powell, masterfully used a graphic novel format to appeal to young readers, whilst still addressing the important topic of racism. This book is compelling and keeps the reader engaged with detailed images and words alike. Overall, March is an eye opening memoir about the inspiring life of John Lewis, who bravely made efforts to end segregation laws.